ChemMatters: The Science Behind Calories and Nutrition Facts Labels 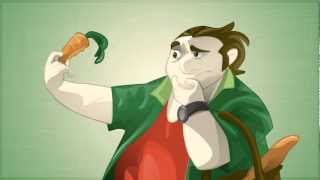 The video explains that the calorie content of food was determined in the late 1800s by chemist Wilbur O. Atwater. Atwater built a four by eight foot device called a respiration calorimeter, which was big enough to allow a person to step into it! It measured the amount of heat they released, the amount of oxygen they consumed and the carbon dioxide they gave off after eating a variety of foods.

Using this device, Atwater was able to measure the precise amount of energy contained in thousands of food items. He found that carbohydrates and proteins were worth 4 Calories per gram and fats about 9 Calories per gram. This 4-9-4 rule is at the heart of how nutrition facts labels are determined today.