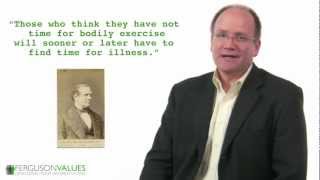 http://FergusonValues.com – Today’s quote is from Edward Stanley, the 15th Earl of Derby, a British statesman who served as Secretary of State for Foreign Affairs in the late 19th century.

Lord Stanley, as he was known, made an interesting statement in one of his speeches:
“Those who think they have not time for bodily exercise will sooner or later have to find time for illness.”

I believe he was promoting the value of fitness.

As a differentiating value, Fitness means ability to perform a function; being suitable; and healthy.

As the son of a British Prime Minister, Lord Stanley traveled the world, including the West Indies, Jamaica, South America, Canada, and even the United States. He also played significant roles in political negotiations in governments abroad. Through his many experiences, I’m sure he saw the full range of people from very healthy to very sick. He witnessed first hand the importance of having the ability to perform one’s function, and what happens when one cannot.

If we are to fulfill our responsibilities in whatever roles we possess — be that in our work, our communities, in government, or even our family — we need to be fit. We need to be healthy.

And if we ignore taking the steps to preserve our health — including exercise — then we’ll likely face what Lord Stanley highlights as time for illness.

So, I encourage us all — and that means me first — to embrace the value of fitness. Let’s remain healthy so we can fulfill our responsibilities.