Why and How Can Exercise Slow the Aging Process? 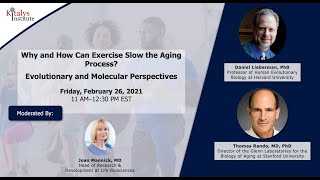 Throughout history, exercise has been touted as a key to good health. Emerging research suggests that in addition to its overall health benefits, exercise also confers a degree of geroprotection, shielding practitioners from the harmful effects of aging, and even rejuvenation, in some respects, of the effects of old age. Join Stanford geroscientist Tom Rando and Harvard evolutionary anthropologist Dan Lieberman in a panel/fireside chat on molecular mechanisms underlying the geroprotective benefits of exercise (the how) as well as an evolutionary framework to explain why (as posed in the subtitle of his recent book, Exercised) something we never evolved to do is healthy and rewarding.

Thomas Rando, MD, PhD, is Professor of Neurology and Neurological Sciences at Stanford University, where he is also the Director of the Glenn Laboratories for the Biology of Aging. He is the Chief of Neurology and Director of the Rehabilitation Research & Development Center of Excellence at the Veterans Affairs Palo Alto Health Care System, as well as founding director of the Muscular Dystrophy Association clinic at the Stanford Medical Center. Research in his laboratory focuses on tissue-specific stem cells in aging and disease, and on pathogenetic mechanisms and gene therapy for muscular dystrophies. His research on aging has demonstrated that it is possible to identify biochemical stimuli that can induce stem cells in old tissues to repair injuries as effectively as in young tissues, and this work has broad implications for the fields of regenerative medicine and stem cell transplantation.

Daniel Lieberman, PhD, is a paleoanthropologist at Harvard University, where he is the Edwin M Lerner II Professor of Biological Sciences, and Professor in the Department of Human Evolutionary Biology. Dr. Lieberman studies how and why the human body is the way it is, with a primary focus on the evolution of physical activity. His research combines paleontology, anatomy, physiology and experimental biomechanics in the lab and in the field. Most of his research has focused on the evolution of human locomotion including whether the first hominins were bipeds, why bipedalism evolved, the biomechanical challenges of pregnancy in females, how locomotion affects skeletal function and, most especially, the evolution of running. His 2004 paper with Dennis Bramble, “Endurance Running and the Evolution of the Genus Homo” proposed that humans evolved to run long distances to scavenge and hunt. His research on running in general, especially barefoot running, was popularized in Chris McDougall’s best-selling book Born to Run. Dr. Lieberman is an avid marathon runner, often barefoot, which has earned him the nickname “The Barefoot Professor”.

Joan Mannick, MD (Moderator), currently serves as Head of Research & Development at Life Biosciences, a leader in developing and commercializing science that extends the healthy human lifespan. Prior to this position, she was co-founder and CMO of resTORbio, a clinical stage biotechnology company that developed medicines that target the biology of aging to treat or prevent aging-related diseases and was recently acquired by Adicet Bio. Dr. Mannick also served as an Executive Director in the New Indications Discovery Unit of the Novartis Institutes of Biomedical Research. She received her BA from Harvard College and her MD from Harvard Medical School. Dr. Mannick completed her residency in Internal Medicine at Brigham and Women’s Hospital and an Infectious Disease fellowship as part of the Harvard Combined Infectious Disease Program. She is board-certified in Internal Medicine and Infectious Diseases.